Humans are engineers, even the artists. We humans engineer the surface of the globe; we change the Earth’s climate; and we drive other species into extinction. We do not do this on purpose. It is by-product of our sheer number and the way how we function as society. However, recently we got worried, at least a bit and some of us. We may got it wrong. Our way of living, producing or consuming does not look sustainable for long. 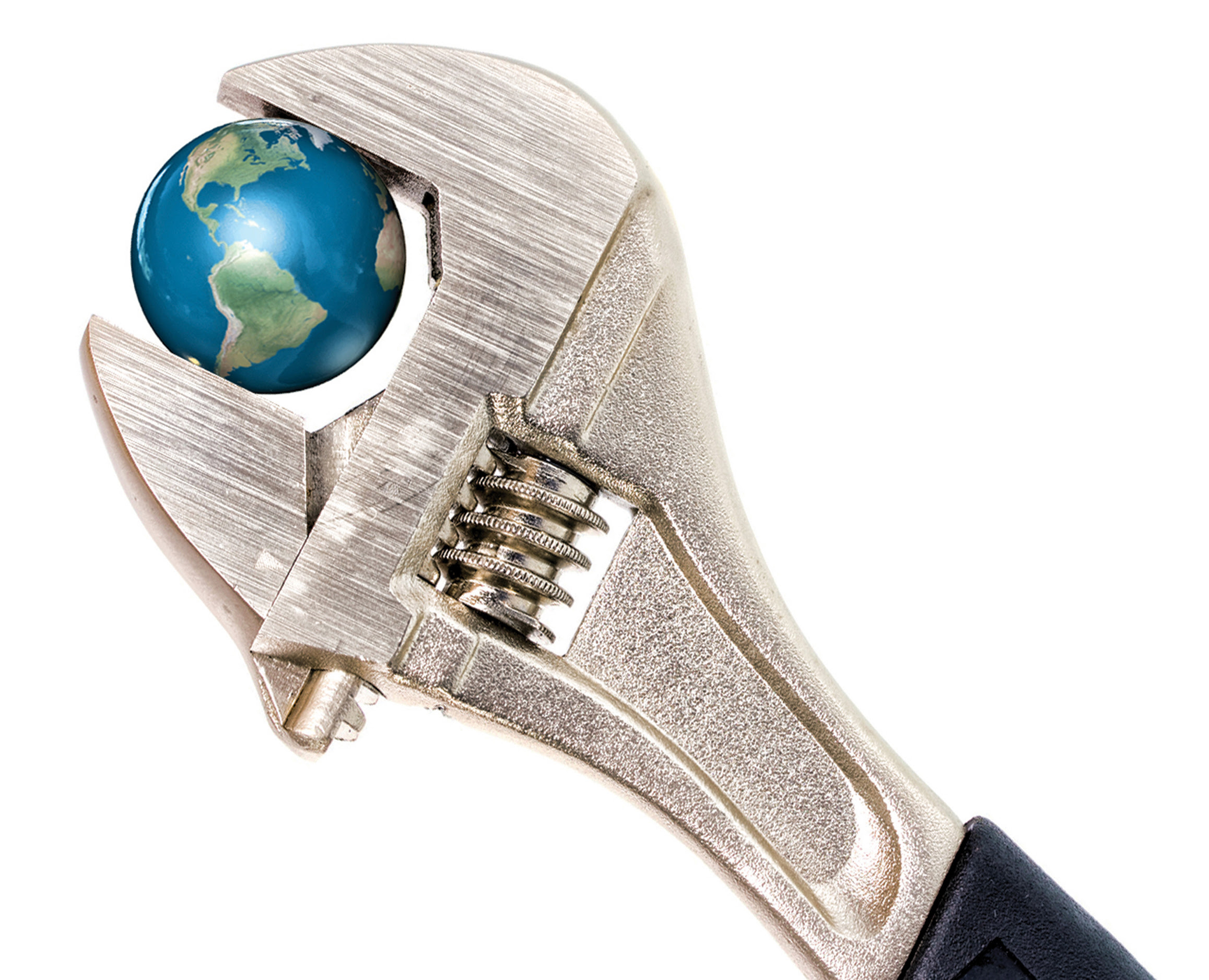 Some decades ago, scientist discovered that the atmosphere filtered less of the solar ultraviolet radiation. More of that damaging radiation reached the ground. Too much ultraviolet radiation is increasing the risk of skin cancers. The phenomenon of reduced filtering of ultraviolet radiation was called "ozone-hole". Ozone in the high atmosphere blocks ultraviolet solar radiation. However the ozone got broken up by substances that leaked from industrial production or industrial goods. The depletion of ozone happened mainly in polar regions at the end of the winter season. The culprit were chlorofluorocarbons (CFCs) and other compounds, such as carbon tetrachloride (CCl4) and carbon tetrafluoride (CF4) that were transported into the high atmosphere. Action was needed. A global agreement was found. The Montreal Protocol (1987) was negotiated to ban these ozone destructing substances. Nowadays the ozone hole is closing [*]. A global policy of regulating emissions was successful.

The same kind of policy also was successful on more regional scales. Regulated reduction of sulphur emissions reduced acid rain. Banning of certain pesticides saved birds from extinction. Thus a general experience formed. Regulations to reduce pollution at the sources showed to be a successful policy to improve living conditions. These regulations could be negotiated when they could be combined with a reasonably cheap technology. The intended shift of technology got economically feasible.


Nowadays we face anthropogenic climate change, because of the massive carbon dioxide emissions from burning coal, gas and oil. In view of human experiences it seems obvious to apply the known mix of regulation and engineering to reduce anthropogenic climate change. Just as air pollution that was causing acid rains has been reduced by cleaner combustion processes; or such as ozone destructing chemical coolants have been replaced by other substances. The common approaches of these and other success-stories were to reduce threat to global or regional earth systems by withholding emission, replacing substances or limiting their use cases. Thus, the successful approach was a technological fix combined with a regulatory measure both targeting the “start of the pipe”.

Unfortunately, targeting mitigation of anthropogenic climate change is more difficult. Applying a “start of the pipe” approach to climate change faces the issue that mankind should reduce inputs where its hurts, namely reducing much the amount of energy that is produced from burning fossil fuels. However, capping burning of fossil fuels would be disruptive for the economic structures or the consumption pattern of many developed and developing industrialised societies. Replacing fossil fuels with other energy sources seem to be difficult, for technical and economic reasons [1]; notwithstanding "unfavourable power-plays".  On the other hand, striving towards “global sustainability” through lesser use of energy would require drastically adjusting the current production and consumption patterns at a global scale. Achieving that seems to be beyond human political skills.

Facing that dilemma, affordable geoengineering looks tempting for some. Contrary to an approach of global sustainability through lesser use of energy, “geoengineering” deploys a “technology fix” to mitigate anthropogenic climate change. The fix aims to modify the earth’s climate system. The modification shall offset the stronger greenhouse effect that is caused by the  increased carbon dioxide concentration in the atmosphere.  Thus the question arises, whether  humans may endeavour to engineer the Earth to counter climate change hazards when they are facing the dilemma that they are not able "to reduce radically energy that is produced from burning fossil fuels"?

Traditionally, modern humans are much inclined to look for technological fixes for problems, because well engineered technological methods have created their modern societies.

However the geoengineering technologies that counter climate change by other means than carbon capture at combustion are of a particular nature. They differ from the technological fixes that,  combined with negotiated regulatory actions previously have been applied to limit threats to regional and global systems. Most of the proposed geoengineering technologies target other parts of the climate system but the carbon-dioxide input into the atmosphere.

A distinction is needed for technologies that do not tackle the initial cause of anthropogenic climate change, namely that the input of carbon-dioxide into earth systems is too high. This distinction is important because it labels the respective technology to exhibit an additional risk. The risk is not technical, but political or social. The risk is to related to public perception that uses the analogy with the proven framework of  “a technological fix combined with a regulatory measure”. However this framework got proven only in cases when the technological fix and the regulatory measure both targeted “the start of the pipe”. Only this framework provided so far an accepted public reference for successful mitigation policies to anthropogenic challenges of earth systems.

[2] Adam Corner and Nick Pidgeon 2010, Geoengineering the climate: The social and ethical implications, Environment Vol. 52.
Posted by Ukko Elhob at 22:14 No comments: